Additives are one of the reasons for the incredible popularity of coffee (the product is the second largest seller after oil, which is not an indicator). Some people add milk to it, some add cream, some add ice cream, and some add everything at once. But you might be interested in another variation of the drink: coffee and whiskey.

How did coffee and whiskey come to be?

Coffee with whiskey is called Irish. It takes its name from the country where this cocktail was invented (Irish – Ireland). And it all started like this

Ireland is the nearest European territory to the island of Newfoundland. The country (and in particular the city of Foynes) became an excellent staging post for intercontinental flights between the U.S. and Europe. In the 1930s and early 1940s, seaplanes were used for this purpose, which had the ability to land on water – very convenient in case of breakdowns.


Foynes was an Irish port on the Shannon River, and after 10 to 15 hours of flying in a cold cabin, it was just heaven on earth for every passenger. After all, at that time airtightness was not even heard of, and jet planes had not yet been invented, so it was not possible to travel faster and more comfortably over 3,000 km. Refueling was carried out in Foynes, Ireland, and from there it was not far to British London – about 700 kilometers. The Shannon River within that city was straight and wide – an ideal runway for a seaplane.

During refueling and maintenance the passengers were taken by boat all the way to Foynes. And the administration there figured a hotel with a bar would be a goldmine for such occasions. One day an Irish bartender named Joe Sheridan, seeing the miserable look of cold passengers whose flight was “cancelled” because of bad weather, decided to follow the principle “drink anything, everything will mix itself in your stomach. And added a little bit of alcohol directly into the coffee.

After tasting the drink, the passengers gasped, woke up, and began to ask what it was. “It’s Irish coffee!” replied Sheridan proudly. Since then, the place has become wildly popular – every passenger on the flight has been eager to get there and taste the Irish coffee.

By the time World War II began, airplanes had improved, and the airport in that city was closed. Landing now took place on the other side of the Shannon, at Rhyneanna Airport (27 km from Foynes). Sheridan, for whom the popularity of the bar was paramount, had no trouble transferring there – he didn’t give away the recipe for Irish whiskey coffee to anyone, so such a valuable staff member was quickly enlisted.


At the new place of work the Irish became the calling card with which every passenger was greeted. And they shared their impressions of the Irish “drink of the gods” all over Europe. American journalist Stanton Delaplane was among the first tasters. He became one of those who had an “epiphany” and then persuaded Joe to emigrate to America.

There, Sheridan’s patron talked to his friend Jack Kepler, owner of the Buena Vista Café, to get him to hire the Irish bartender. The partners struck an agreement, and Irish began his journey across America from the city of San Francisco. That’s how the Irish coffee cocktail with whiskey gradually gained popularity all over the world. 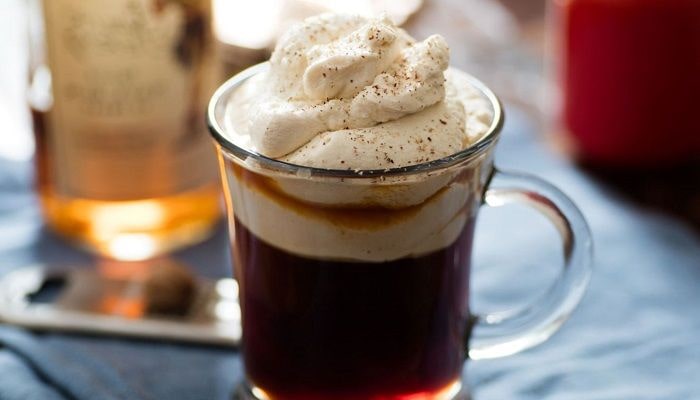 How to make a proper coffee with whiskey

Many people appreciated the taste of Irish drink in the twentieth century and considered it ideal. Probably it is so, but it is possible that too little time has passed since its creation… However it is, for today it can be prepared only one way – to repeat the classic recipe of Irish coffee, observing all the canons, laid down by Joe Sheridan.


For a couple of servings of Irish you will need:

is unacceptable (because there will be alcohol in the cocktail anyway);

Of course, the recipe for such a legendary cocktail as Irish has its own nuances, because the composition of Irish coffee is regulated:

before being added to the grinder. The grinded product should be used immediately, without waiting for the smell to disappear and the brightness of the taste to fade.

The minimal degree of alcohol permitted for Irish whiskey is 40 degrees. The ideal alcohol is Jameson, Tullamore and Bushmills.

must be sufficiently fat (at least 30%, and preferably 35-38%). The main condition is that before making Irish cream they should stand in the fridge for at least 2 days, and then you can whip it with sugar. Otherwise, the cream will not “cap”. 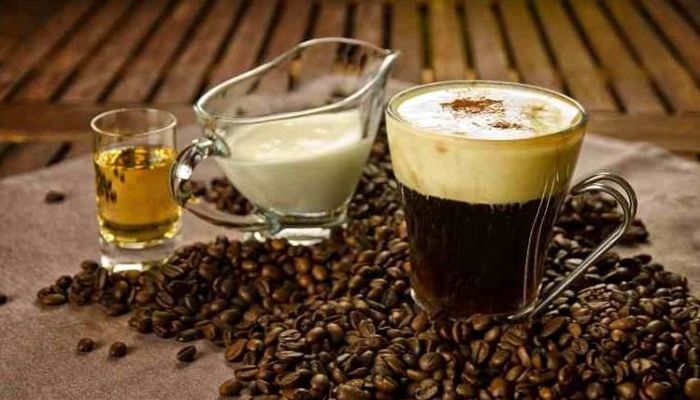 So, making Irish coffee at home should go quickly, so stock up on ingredients in advance and get started:

The rules of etiquette state that Irish coffee is served only in glass glasses with a handle, which is attached to the bottom, on a stem. Irish must be drunk only through a layer of cream, stirring is not allowed. A soufflé or a light dessert with mascarpone will be appropriate. It is not allowed to drive after such a meal, so it is better to rest afterwards.

Now you know all about Irish coffee. You can make the legendary drink right now!