Elephant droppings coffee: the most expensive

Connoisseurs of original types of coffee can enjoy the incredible taste of the drink extracted from elephant feces. The new gourmet variety is considered the most expensive on the planet, but even the high cost does not stop true gourmets. Buying the processed grains becomes a contribution to charity – up to 10% of the profits from the sale go to the elephant protection fund.

The history of the exotic drink

The coffee obtained from the elephant’s defecation is called Black Ivory, which translates as ‘black tusk’. The very idea of harvesting the beans in manure and then roasting and drinking them seems completely abnormal, but there is a hidden meaning in the process.

The unique processing of the coffee berries helps to neutralize the bitterness in the finished drink. There is a similar production using musangs, which is losing popularity. Adulterated products have appeared on the world market, and in the pursuit of profit, farmers have begun to capture wild animals and imprison them in captivity in hopes of making a handsome profit from the sale of the beans.

Initially, the businessman was also involved in making “civet” coffee, but he later abandoned the production, which was contrary to nature. The Kopi Luwak trademark had compromised itself with numerous fakes and cases of animal cruelty. The founder of the Black Ivory Coffee Company managed to preserve the natural characteristics of the beans and the beverage, avoiding a repeat of the bitter experience with musangs.

Elephants were chosen as the foundation of production for a reason:

The production was founded in 2012 and is located on the Thai Reserve. The first “harvest” was about 70 kg, which quickly sold out among the gourmet buyers.

Technology and peculiarities of

It takes about 30 kg of coffee berries to produce 1 kg of processed beans. Most of the product is chewed up by the elephant as it eats, and is also trampled or lost in the tall grass after “going out”. The animal is fed arabica berries, and the process of digestion and fermentation takes 15 to 30 hours. Under the influence of bacteria and stomach acid, the proteins that give the coffee beans their bitterness are broken down. 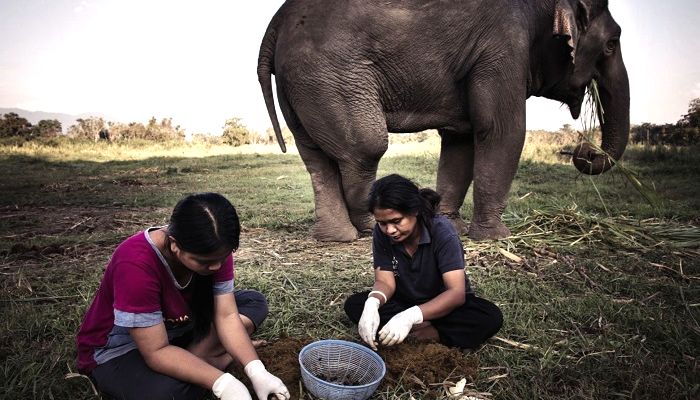 Additionally, the future coffee is impregnated with the fruit aromas of the animals’ natural food – sugar cane, bananas. On plantations, elephants are specially fed fruit puree with the addition of coffee berries to give the finished beans a unique flavor and aroma.

Cruelty to the animals is completely eliminated, and the quality of the product remains at the highest level.

The pickers extract the processed coffee berries from the elephant’s feces, rinse them thoroughly with water, remove the beans, and deliver them to Bangkok to be dried.

The arabica does not lose its unique recognizable acidity during the digestion process; otherwise, the taste of the coffee only benefits.

Evaluation of the main characteristics on a five-point scale is presented in the table:

Intense soft coffee with subtle fruity notes captivates gourmets from the first sip of the fragrant drink. Some tasters noted the taste of milk chocolate with a pleasant nutty aftertaste. 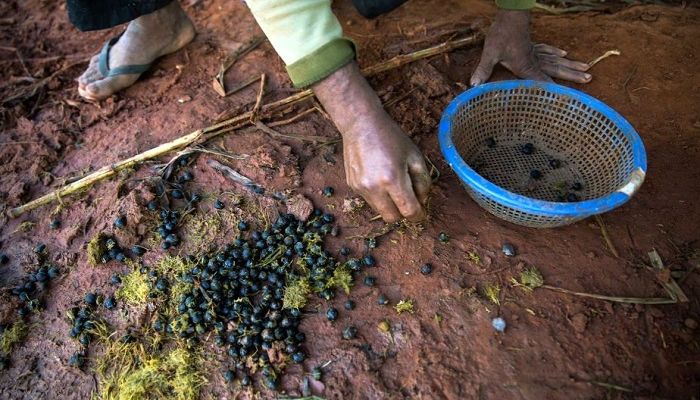 Where to Buy and Taste the Original Beverage

As long as Black Ivory Coffee Company is a monopolist on the market, the risk of buying a fake is minimal. You can sample Black Ivory Coffee at several of Anantara’s hotels in the Maldives. Elephant feces coffee is also available at Anantara’s Golden Triangle Resort sanctuary. More recently, by custom order of Arabian sheikhs, the variety is distributed in Abu Dhabi.

Blake Dinkin still adheres to the humane way of production, so he keeps production of the original coffee on a modest scale. The entrepreneur plans to expand the plantation, but careful treatment of animals is an unwavering tradition of the company.

According to recent studies, the production is absolutely safe, because elephants do not get coffee addiction. There is no chance of getting a herd of angry elephants in a state of nervous excitement one not-so-great morning. To produce caffeine, the beans must be heated to 70 ° C, which is completely eliminated when feeding the animals.

The price of coffee from elephant dung is quite high, so the product remains the privilege of wealthy people. Guests of listed hotels can order a cup of drink “only” for 50 U.S. dollars, and the cost per kilogram so far does not exceed 1200 c.u. The coffee is now on retail sale and can be bought at popular supermarkets in Phuket – Tesco Lotus and Big C.

Compared to the legendary Kopi Luwak, the price of “elephant” coffee is several times higher – for 1 kg of Kopi Luwak they ask about 350-700 CU. The high price of this unique product can be explained by its moderate production, which is not mass-produced.

Blake Dinkin’s first priority is animal safety – on the territory of the nature reserve “giant coffee machines” are reliably protected. The elephants undergo daily veterinary examinations, so consumers get a 100% organic product.