A review of the best Krups coffee machines

Krups is an old brand that was created back in 1846. The company began to specialize in devices for coffee making in the early 1960s. Since then, the brand name has been closely associated with quality, practicality and technology. Especially when it comes to automated devices. A detailed review of the brand coffee machines clearly shows why they are so highly appreciated by lovers of delicious coffee drinks. 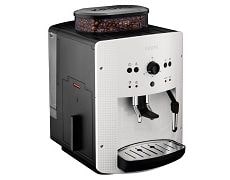 This coffee machine from the “Roma” category belongs to the budget segment. It has a plastic body and a combined type of control (electronic-mechanical). It is notable for its simplicity and will be intuitive the first time you use the coffee machine. All indicators are displayed on the main panel.

The device supports only coffee beans, and the built-in tank has a limit of 260 grams. Coffee grinder is equipped with metal grinders and performs 3 degrees of grinding (standard for most coffee machines of the company). Water tank capacity is 1.7 liters.


The appliance has a manual cappuccinator. The range of drinks includes:

Like most Krups models, this coffee machine has a built-in “Claris aqua-filter” water filter. Also supports self-cleaning function of the system. 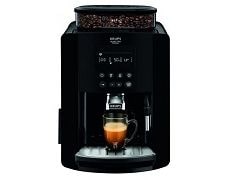 This coffee machine belongs to the “ARABICA” series. It does not differ much from the previous one, except for some additional options. First of all, we should mention the automatic cappuccinator cleaning, which is not present in the Roma model, as well as the ability to adjust the temperature of the beverage.

The manufacturer has added a power-saving mode and an off timer to this coffee machine. Otherwise, there are no changes between the devices, except for a slight redesign. 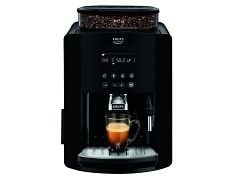 Despite the fact that the coffee machine belongs to the Essential category, it does not differ from the Roma model, except for the design. The body is made in black.

Some changes are also made to the cappuccinator, which reduces the range of drinks to 4 (no latte). 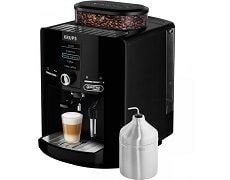 This coffee machine belongs to the advanced Quattro Force series. The first difference is the automatic cappuccinator, which makes it easy to prepare drinks with milk. Bean hopper is slightly larger, up to 275 grams. The water tank has the standard 1.7 liters.

The second significant difference is the presence of electronic control and LCD display. The device has on and off timers (both in manual and automatic modes). 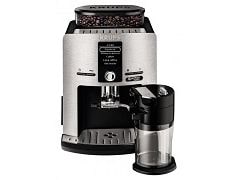 Improved version of the previous model in the same series. The body is made not only of plastic but also of metal. The main difference is the built-in milk tank, thanks to which the process of making drinks can be fully automated.

There are no other differences in functionality, characteristics or technical features from the younger model EA82FD10 version. 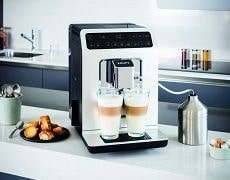 Coffee machine Evidence series. Its main difference is the advanced touch control. The coffee tank has not changed (260 grams), but the water tank has increased significantly. Its volume is 2.3 liters. The device allows you to prepare 2 cups of cappuccino at the same time.

The disadvantage is considered an external container for milk. Despite the fact that it is included in the kit, in terms of convenience it is much inferior to the built-in reservoir in Quattro Force EA82FD10. 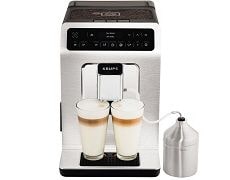 This model is completely identical to the previous one. It also belongs to the Evidence series.

The only difference between them is the material of the body. The EA891C10 version, in addition to plastic, has chrome steel parts. 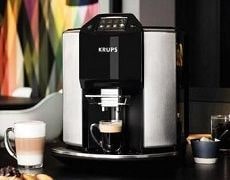 The most advanced coffee machine, which belongs to the Barista New Age series. It includes all the features of other brand devices, and also has some unique differences. Makes a full range of drinks, including lattes and Flat White.

Unlike previous coffee machines, the Barista supports beans and ground coffee, and has 4 gradations of grind, as opposed to the standard 3.

Another significant difference is the personalization feature, which other devices do not have. With it you can create your own recipes for drinks, setting the conditions of cooking in manual mode. All internal parts are made of metal (stainless steel). The body has both plastic and metal elements.