Benefits and harms of barley coffee

Invigorating and aromatic coffee is taboo for people with high blood pressure or diseases of the cardiovascular system. A worthy alternative can be barley coffee, which for a long time remained in the shadow of the natural product. Thanks to the fashion for a healthy lifestyle and proper nutrition the forgotten elixir is confidently regaining the lost positions.

What’s behind the name

The coffee counterpart is based on barley, known to mankind for over 5,000 years. According to historical sources, the grain crop was part of the diet of Roman gladiators and Russian bogatyrs in the form of bread and porridge. Later came a drink made from roasted and ground barley.


This recipe was created at a time when Europeans were forced to replace an elite product with a budget version due to the high cost of coffee beans. Now the ripe barley ears are harvested, leaving whole grains behind, which are then washed and roasted. At the next stage they are ground and packaged for transportation.

Alternative to coffee – or not?

Barley coffee drink is not the best counterpart to black coffee. In taste the substitute only remotely resembles the original, although similar in steady foam and color. There is no original bitterness characteristic of natural espresso. The faint aroma has grassy notes. Pleasant mild taste is nicely shaded by milk – such a barley drink is compared to cappuccino.

With a strict ban on coffee, you can treat yourself to an analogue that has good tonic properties. But it is better not to count on the obvious invigorating effect – barley product lacks caffeine.

The drink can be made from beans or dry concentrate. Soluble powder is much easier and quicker to brew, but the taste varies depending on the recipe of the company making the product. To distinguish between a barley drink cooked in a turkey and a freeze-dried beverage is capable of the average consumer, not a gourmet.

Grain decoction not only saves money, but also strengthens health. The benefits and harms of barley coffee have been studied by modern medicine. The benefits turned out to be much more:

The useful drink contains valuable trace elements, beauty vitamins A and E, as well as D and the entire B group. Brewed barley improves hair, teeth and nails, as well as normalizes the nervous system. 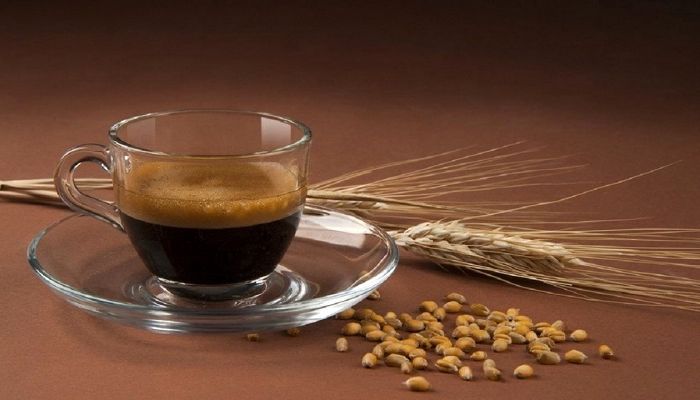 Negative effects from consuming barley broth have not been identified. It is allowed to pregnant women, as well as children from the age of 2 years. Among the few contraindications doctors note:

All others are advised to drink no more than 2-3 cups a day. The controversy about the benefits and harms of the coffee drink made of barley and rye concerns its caloric value – 380 kcal. 100 g of the product contains 84 g of carbohydrates, which is one-third of the daily norm for an adult.

Retail chains offer ready-to-use blends based on the cereal crop:

Contains ground barley and rye, as well as natural flavoring.

Externally the powder looks like ground coffee beans, but the shade is lighter.

Includes roasted and ground cereals: barley, rye and oats. Preparation is similar to the classic recipe for brewing espresso.

You can buy barley coffee in Moscow in any supermarket or online store with delivery.

To improve the taste you can add milk, sugar, cream and even ice cream to the finished drink. A pinch of cinnamon or a slice of lemon will give a special spice. You shouldn’t expect from barley broth the richness and strength of a classic espresso, but subtle notes of bread and an enveloping aftertaste will leave a pleasant impression.