Matcha latte – a recipe for the healthiest tea

Coffee is loved by millions of people around the world, but now Hollywood actors, popular bloggers and socialites can increasingly be spotted with a cup of matcha latte. The drink not only looks delicious, it is also the most healthy tea in the world. And it is just as invigorating as coffee.

What is a matcha latte?

The drink began rapidly gaining popularity in the U.S. after Gwyneth Paltrow talked about her giving up coffee in favor of matcha lattes. Previously, the recipe was known only to convinced vegans and fans of Japan, and everyone else was skeptical about the green powder.


However, after an interview with the world-famous actress, numerous Gwyneth Paltrow fans began trying to make matcha lattes at home. Over time, it began to be served in cafes and restaurants around the world.

Nowadays a healthy lifestyle is an inevitable attribute of the glamorous hangout, that’s why the tonic drink is in high demand. Matcha powder is used not only for making lattes and cakes but also for homemade cosmetic masks and scrubs.

In general, matcha is a traditional beverage for China and Japan. It is a special kind of green tea from Camellia Sinensis, which produces a lot of caffeine and tannins during its growth and provides the body with energy.

The leaves are cleaned of twigs and excess material and ground to a powder that is then brewed. The tea has a delicate green color, rich aroma, and harmonious taste with a slight bitterness. However, it is possible to experiment with the taste by adding cow or coconut milk or almond milk and different sweeteners like sugar, honey, and syrups to the recipe.

Matcha is a healthy alternative to a latte, which is made according to a classic recipe with coffee and milk. A glass of delicious drink with appetizing foam makes it possible not to break the usual ritual. This unique tea contains a lot of caffeine and invigorates even better than coffee, but does not provoke caffeine depletion. This effect is familiar to anyone who has ever drank a few cups of espresso to wake up.

Other health benefits of matcha lattes:

The caloric value of matcha lattes depends on the milk that is added to the recipe: 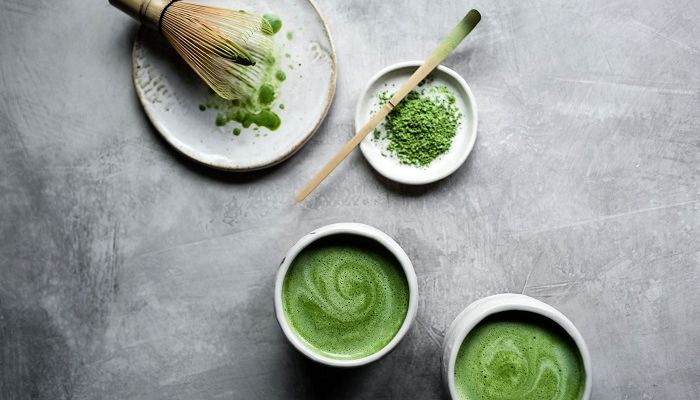 This is another plus of matcha lattes – its caloric content is many times less than that of a classic coffee drink. Especially if you don’t add honey or sugar to the recipe. At the same time the antioxidants it contains slow down the growth of fat cells and curb appetite, which has been clinically proven. The weight loss process is easy and comfortable.

To make matcha lattes, you’ll need a whisk. In Asia, they use a bamboo whisk and you can order one from Aliexpress, for example. But a regular cooking whisk or even a simple teaspoon will do. If you want to get a puffy foam, you can do it with a cappuccinator.

Cooking technology is quite simple. Consider the classic recipe with cow’s milk: 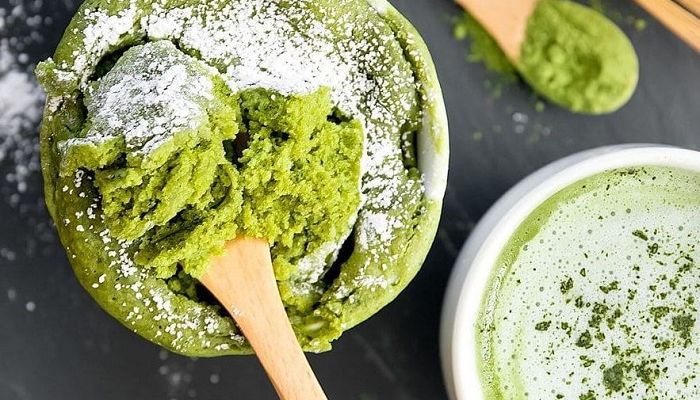 As the powder gradually settles, it is worth stirring occasionally with a spoon, picking up the sediment from the bottom. You can drink this tea both hot and cold with the addition of 3-4 ice cubes. The main thing is to drink it freshly prepared, because only then you will get the maximum dose of useful substances.

If you want to experiment, you can make a matcha latte with coconut milk at home. Just don’t boil it, it’s better to warm it to 80 ° C – a food thermometer will help you with this. You can also add soy, oat, almond and nut milk to the recipe. This will reveal new shades of flavor.

However, keep in mind that the lower the fat content of milk, the harder it is to whip it into a foam. As a sweetener, you can use agave syrup, cairngrass, and stevia. Each of them has its own bright flavor, which will give additional notes to the finished tea.