Turkish Coffee – An Aromatic Legend of the East

Turkish coffee (Türk kahvesi) is an essential part of the vibrant Turkish culture and an attribute of warm eastern hospitality. It’s not common for Turks to reveal culinary secrets. And yet we will try to unravel how ordinary Arabica beans are transformed into a masterpiece with the unforgettable taste. 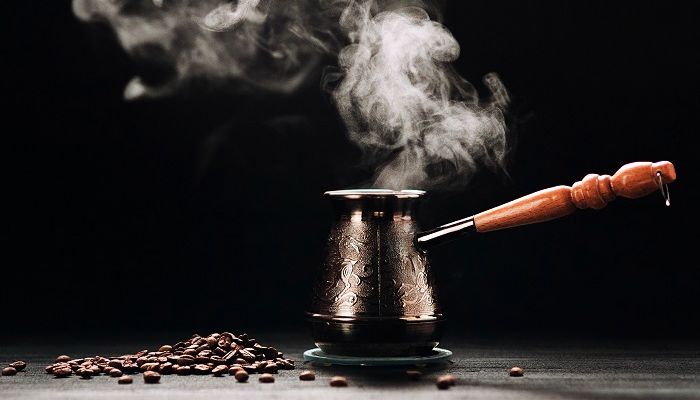 History of appearance and spread of the drink

There are two main versions, one of which reveals how coffee arrived in Turkey. One of them is that in 1554 it was brought here by two Syrian traders, who opened a shop for selling exotic beans in the capital. The second version dates the appearance of Turkish coffee to 1517. The ruler of Yemen (then part of the Ottoman Empire), Ozdemir Pasha, presented the Turkish Sultan Suleiman the Magnificent with an extraordinary gift – coffee beans.

Along with the gift was also communicated the method of preparation. But the proud chef of the Ottoman palace created his own unique recipe, that is, he brewed Turkish coffee. The drink immediately captivated the sultan. At first only members of the court were given the honor of drinking the “Muslim syrup”. Later “black gold” together with the recipe went beyond the palace walls to conquer the masses. Istanbul began to be filled with coffee houses, where men had long conversations over aromatic cups and backgammon.

Don’t miss: The History of Coffee

It is said that it was from Turkey that the precious bean began its journey across Europe. Istanbul traders took the “black gold” to Venice in the early 10th century. And by the middle of the same century the King of France Louis XM received from the Turkish sultan Mehmet M an amazing gift – the very same beans. To this day, in many European capitals, establishments offer the famous Turkish coffee. 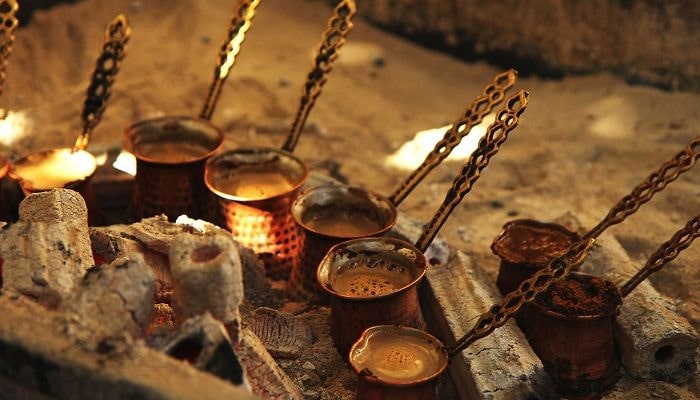 So, the main attribute is a turkey pot. Ideally, it should be copper and cast. The inside surface is coated with silver or food-grade tin. The bottom of the censer is wide and the neck is narrow. This kind of vessel is the best way to create a rich foam and maximize the extraction of seeds. No less important is the volume of the vessel.

You can’t make coffee for two in a large roasting pot. It is necessary to choose the cup according to the number of servings.

Read also: What should be a coffee maker

This is the only way to get the right result. By the way, in Turkey, jesvos are measured in cups. Here you can buy a vessel for four, two, or even one person.

Now you need to prepare the main ingredient – the coffee itself. The best choice is fine grind 100% Arabica. Cheap product will spoil a classic recipe for Turkish coffee. A coarse ground coffee will not give the necessary extraction and will not have time to reveal the entire bouquet. It is also desirable to grind beans immediately before brewing.

You can use well water, spring water or filtered water. The optimal temperature is room temperature.

Pour two teaspoons of ground grain and a spoonful of sugar (if needed) into a jesova. Mix the loose ingredients and pour 150 ml of cool water. Place on low heat and watch, waiting for the foam. When the cap is completely risen, you must immediately remove the container from the heat. Allow the bubbles to settle a little and repeat the procedure.

Some masters even do it three times. If you make coffee the Turkish way, it will be bitter and stronger. But the Turks say, “Real coffee must be black as hell, strong as death, and sweet as love.

Mehmet Efendi is a renowned coffee producer. Mehmet Efendi’s Kurukahveci brand is the most popular in the country. Not surprisingly, he has his own method of making the drink. His recipe is very similar to the classic one. The difference is that Mehmet Bey recommends to stir the liquid continuously during boiling. In his opinion, so increases the saturation of coffee.

Important: Ranking of coffee beans for the turkey

After the second rise of foam, the guru divides the drink into two parts. The first half is poured into a cup. The second part is brought to the fire for another half a minute, then poured to the first, along with the grounds. In 30 seconds the grounds have settled, and Mehmet Efendi coffee is ready to drink.

With cream and nuts 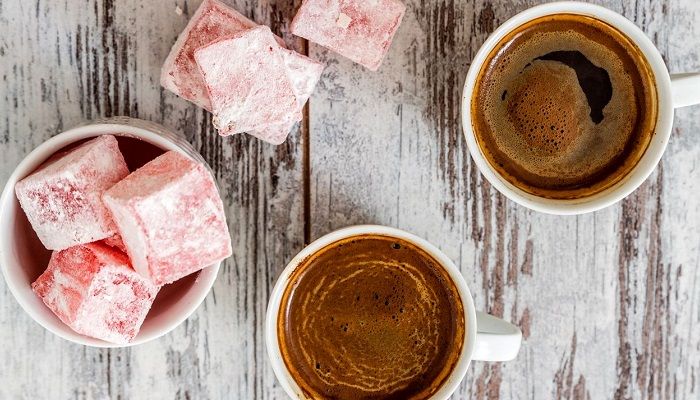 And here is the original recipe, according to which you can make Turkish coffee at home. First, you need to brew a classic drink. Then pass it through a filter (strainer) to remove the grounds. In a separate bowl, heat 30 ml. of cream, mixed with a spoonful of sugar. Combine the two ingredients of the cocktail and sprinkle chopped nutmeg on top.

Features of the ritual

Along with the original recipe, the Ottoman court originated the tradition of serving coffee. Originally, of course, the drink was brewed without sugar. To brighten up the bitterness, to the steaming cup added a saucer with delicate relish.

It is not customary to take the last sips with water. First of all, it would destroy the great aftertaste. Secondly, it would be a sign to the host that the coffee was bad!

Men and women in Turkey are both passionate about coffee. But the ladies turn their gatherings with a cup of coffee into a secret Oriental ritual. Girls gather in flocks at a coffee shop or at a friend’s house, sipping a drink with dried fruit and nuts, sharing the latest news.

The most amusing thing awaits at the end of the ceremony. The mug is turned over onto a saucer in a special way and the liquid is allowed to run out. The ladies believe that in the intricate patterns of the grounds you can see your future. By the way, the finer the grains, the clearer and more interesting the “fateful” picture is.

On the average, a cup of coffee in an Istanbul café costs 7-8 UTU. But don’t forget to tip the waiter, because in Turkey not tipping is considered the height of indecency. The incredibly tasty Kavue and the impeccable service are more than worth two extra lira!