How to Choose a Carob Coffee Maker with Cappuccinatore

For homes or small offices, a coffee carob with a cappuccinatore can rightfully be considered the best choice. At a moderate cost, it allows you to prepare not only espresso, but also all types of dairy beverages. With the right choice of carob models, they can compete on an equal footing with more expensive coffee machines, yielding to the latter only in full automation of the brewing process and minor differences.

The cappuccinatore is the main advantage of coffee makers

Only two types of brewers know how to make real milk drinks in the right recipe. These are carob (or “espresso”) coffee makers and automatic coffee machines. The price of the latter is quite high, which does not always make the devices the best choice for the home or small office. On the other hand, a carob coffee maker with an automatic cappuccinatore will cost much less, with almost nothing inferior in capabilities (versions with a manual cappuccinatore cost even less).

The main feature of roaring coffee makers is the rapid preparation of quality espresso and the creation of milk foam. Some models have built-in nozzles that have the ability to adjust the thickness of the crema. The pump coffee maker with a cappuccinatore (with a pressure up to 12-15 bar) is able to give a ready portion in 1-2. minutes. The only disadvantage is the need to fill and clean the cone every time. Unlike “superautomatic” machines, this does not allow the cone device category to dispense one portion after another with no delay.

The key difference is making cappuccino in a carob coffee maker according to the classic recipe. Compliance with all the subtleties and brewing technology will allow you to get an incredibly delicious drink. The process involves:

It is worth bearing in mind that only those models that have a semi-automatic cappuccino can make cappuccino in a carob coffee maker. If the device whips the foam in the cup, but not inside the construction, the preparation according to the original recipe may not work.

The same applies to three-layer drinks. To make a latte in a carob coffee maker is necessary:

On the other hand, latte macchiato requires whipping the foam right in the cup. After that the coffee is poured in a thin stream. Therefore, when choosing the type of cappuccinatore you should consider the peculiarities of the recipe.

Read also: Pros and cons of the carob coffee maker

Some coffee makers feature a built-in milk tank. They have an automatic cappuccinatore, so the preparation of lattes in a carob type coffee maker will be almost fully automated (loses to coffee machines only in the absence of a built-in grinder). The milk container is removable, so it is easy to store in the refrigerator. 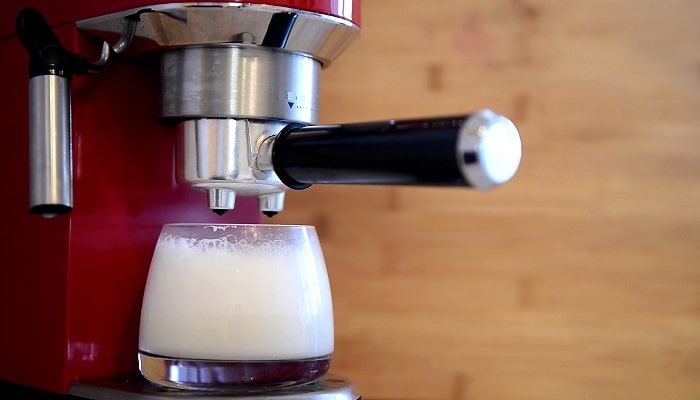 The best models of carob coffee makers with cappuccinatores

Almost all “espresso” models are equipped with cappuccinatores, but their design may differ, which will affect the capabilities, convenience and even cost. 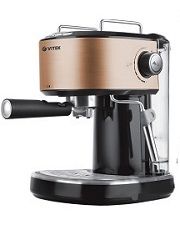 One of the cheapest options, which is equipped with a cappuccinatore with a panarello nozzle. The main advantages:

Among the disadvantages are the plastic body and the lack of auto shut-off. The average price is 6-7 thousand rubles. 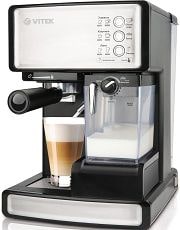 One of the few carob coffee makers on the market, which has an automatic cappuccinatore and a built-in container for milk. Allows for almost complete automation of the process.

The density of the foam regulator.

The disadvantages are that the hybrid control (a combination of manual and electronic) is not very convenient. It is also possible to allocate the increased power consumption, on average 200 W higher than analogues from other manufacturers. Approximate cost – 16.8-17 thousand rubles. 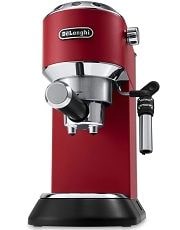 One of the leaders in the category from a well-known manufacturer. Has a lot of advantages: