Raph coffee: the secret of its popularity

Raph coffee is considered a relatively young drink, as it counts only a couple of decades of its existence. There is nothing original in the composition, but the recipe uses special cooking techniques and non-standard proportions of components.

The history of Raff Coffee dates back to about 1997, when coffee houses just started to appear on the territory of the former Soviet Union. Coffee Bean, a mini coffee shop was opened in the center of Moscow. The main highlight of the place was a coffee machine that allowed to save time for making a fragrant drink.

Along with classic espresso there were other espresso-based recipes on the menu. A variety of drinks attracted regulars and new customers, including a gourmet named Rafael. Driven by the bitterness of espresso and the creaminess of cappuccino, he asked the waiters to make a coffee that was personalized, sweet and mild.


The mini coffee shop’sbarista combined a shot (a standard serving) of traditional espresso, nonfat cream, vanilla sugar, and whipped the resulting mixture into a heated cup with a steamer, then served it to Rafael. 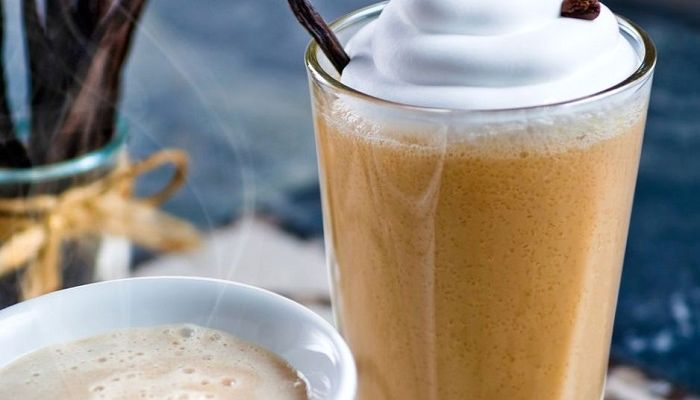 He was very pleased with it, and the new recipe aroused the interest of the other regulars in the cafeteria as well. So as not to have to go into a long explanation, when ordering they said, “For me, like Rafa. A couple of months later, the request was reduced to “Raff Coffee,” and the staff put the unusual recipe on the permanent menu.


The name of the person who invented the innovative cocktail has faded into oblivion – the information on the Internet is quite contradictory. Some sources name three employees of the cafeteria at once, who then went to work at Caffeomania. Others attribute the authorship of the recipe to the two-time winner of the Barista Championship. Be that as it may, the fans of the delicious drink are grateful for the successful experiment with familiar ingredients.

The classic version and composition of the drink

The caloric value of Raph coffee is 100 kcal per 100 g of product, so when dieting, you should use it with caution. This is a dessert cocktail with a homogeneous structure, subtle notes of vanilla and a velvet aftertaste. This original cocktail can be enjoyed in the afternoon, though in Italy, coffee with milk products is a popular drink until noon.


Raph coffee has a precise ratio of ingredients:

Baristas now add other additives to the basic recipe, enriching the familiar taste. Cinnamon, citrus juice, and even honey can be found on the menu.

Raff differs from latte and cappuccino in the way it is brewed – nonfat cream must be whipped together with the espresso directly in the cup. Originally the original coffee was made in this way, but modern baristas mix the ingredients in a pitcher and then pour the mixture into a warm glass.

How to brew it right

The secret of the popularity of the classic coffee Raff recipe lies in the homogeneity and velvety texture of the drink. To get the desired texture, it is important to observe the subtleties of preparation:

rather than an automatic one, so that the tubes of the device do not get clogged with particles of ground coffee.

Average serving size of coffee Raff is 125-150 ml, a comfortable serving temperature is 60-70 ° C. If you increase the volume of the drink, 2 parts of espresso is taken, and the amount of sugar and cream is also doubled.

The cocktail is served in a glass glass or traditional cappuccino cup. The price for a coffee Raff varies from 45 to 700 rubles, but the average price is rarely more than 250 rubles for a standard portion of the fragrant drink.

The structure of the cocktail depends on the method of whipping. Cafes use professional coffee machines with high output – cappuccinators whip the espresso and cream until a good, firm crema forms. A home coffee machine does not produce a very high crema because of the reduced power.

The recipe for coffee Raff in a coffee machine is quite simple:

You can make creamy coffee at home without a coffee machine:

Experiments with composition and ingredients are still going on, because coffee Raff itself appeared thanks to daring and innovative decision. The authors of the original drink are still working in the coffee business. Nothing is known about the fate of the man whose name was given to the famous Russian cocktail.