What is useful for coffee with lemon

The truly Russian way of drinking tea with a slice of sour citrus, which originated in 19th century Russia, has been familiar to us since childhood. But black coffee with lemon is a revelation for many, although this tradition is common in Italy. Italians call it espresso Romano, while foreigners often ask for a Sicilian coffee, although in Sicily it is not a common name.

Lemon flavor for an invigorating beverage

Adding lemon to sour-bitter coffee seems like a bad idea at first glance, because many people purposely drink it with milk or cream in an effort to get rid of the extra acid. But still, the invigorating coffee and lemon flavor is so unusual that it’s worth trying the drink to form your own opinion. In addition, citric acid neutralizes the excessive bitterness of overcooked beans.

The original Romano recipe calls for 25-30 ml of a classic espresso, to which you squeeze 5 ml (1 teaspoon) of fresh lemon juice. It is served with a thin slice of citrus sprinkled with sugar, or with whorls of zest, sugar is added as desired. There are many variations on the theme – with ginger, honey, milk, citrus liqueur and ice cream.

Not only tasty, but also healthy

We cannot say that this flavorful cocktail can cure you of deadly diseases, but it is not poisonous, either. If you’re not careful, the danger of drinking espresso can be just as high as endlessly drinking any other caffeine-containing product. But 1-2 cups of espresso Romano a day can have a positive effect on your well-being.

Lemon coffee relieves headaches and hangovers. These properties of the drink have been known since ancient times. It was used to cure Roman revelers in the Middle Ages. In Sicily even today, if you have a headache, the first thing you will be offered is a cup of espresso with a slice of lemon.

Coffee with lemon is good for people who have a low tolerance for caffeine. This is because the citric acid neutralizes some of its effects.


In the absence of contraindications, a serving of coffee with lemon will be beneficial if you have:

There are legends about the benefits of coffee with lemon for weight loss. But miracles do not happen. Daily excess of a norm of calories though with Romano, though without it inevitably conducts to weight gain. the “weight-loss” myth is based on the property of lemon to improve digestion and speed up metabolism. After a heavy dinner, a cup of Romano will help to cope with the consequences of overeating, but will not affect weight loss. 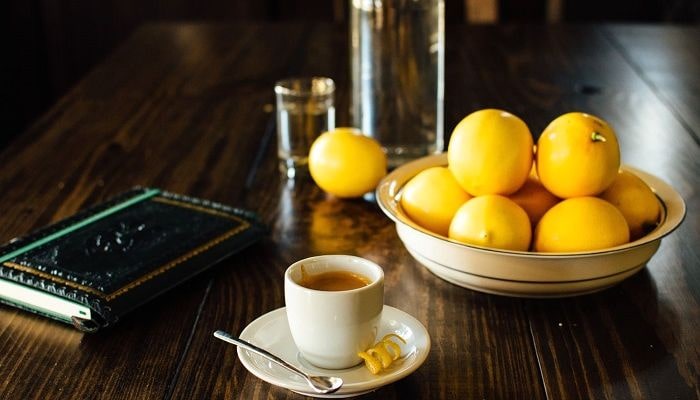 Espresso Romano, unlike milk lattes, macchiatos or cappuccinos, has virtually no calories – only 3.6 kcal per 100 ml. But few people drink it without sugar, which greatly increases the caloric content.


Everything is good in moderation

People with gastrointestinal diseases will definitely have to give up the drink. With peptic ulcer, gastritis, gastroduodenitis, coffee with lemon can cause significant harm to health. Coffee itself is aggressive for the gastric mucosa, and in combination with citrus it becomes doubly dangerous, especially in the acute stage of the disease.

The use of coffee with lemon on an empty stomach is able to harm your health!

About the harm of caffeine know all hypertensive people. At the initial stage of the disease minimal doses of weak coffee with lemon are unlikely to critically affect the well-being, but still it is necessary to consult a doctor.

Invigorating drink can harm the health of cardiac patients, but the addition of lemon reduces the concentration of caffeine, so with the approval of the attending physician a small cup in the morning is quite possible.

Pregnant women, especially those at risk of miscarriage, should not drink caffeinated beverages with lemon or anything else.

There is no difference in taste or color

Coffee with lemon is easier to try than to read reviews about its taste and effects on the body. Some people like the invigorating, refreshing citrus notes which are unexpectedly in harmony with the astringency of espresso. Others, on the contrary, find this combination unpleasant.

If adding lemon seems like a radical experiment, you can start with the French version. Add 1 teaspoon of lemon liqueur to a standard dose of espresso, and top with whipped cream or ice cream. Most people will like this cocktail, although there are no more waistline benefits.